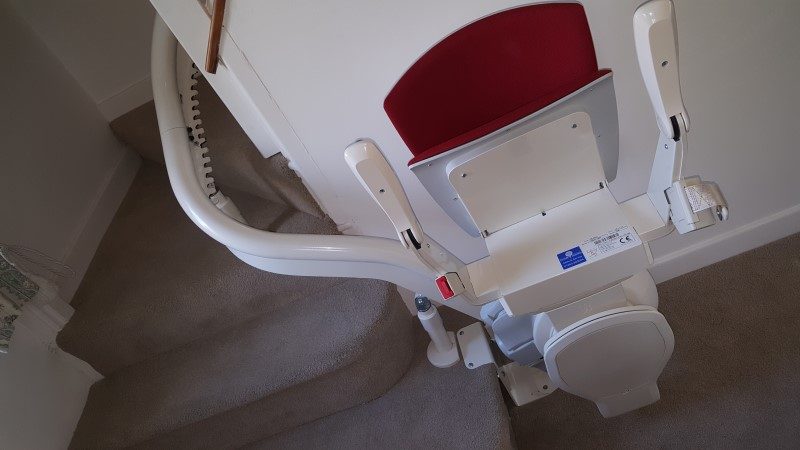 Norfolk Stairlifts have recently installed an Otolift Air curved stairlift in Wood Norton in North Norfolk on this lovely staircase. The lady had recently had a hip replacement and was now finding the stairs too much to do comfortably.

The Otolift Air Curve Stairlift supplied by Norfolk Stairlifts is the smallest single rail stairlift currently available. Its rail is hardly noticeable when fitted and the seat is equally as stylish. It is suitable for almost all curved staircases. It is available in 125 kg load capacity. It is particularly suitable for fitting on the inside of staircases where its ability to bend and turn quickly are of most benefit.

An installation on the right hand side of the staircase as viewed from the bottom was chosen as it provides a neat place for the stairlift to park which was occupied by a table and is not in the way of anyone walking through the room.

This Otolift Air Stairlift, from Norfolk Stairlifts is available in fabric, synthetic leather or real leather seat coverings. Any of the coverings are suitable for domestic use, with the synthetic leather being best for multiple users. There are 10 colour choices in the range.

Norfolk Stairlifts give a 2 year Guarantee on all New Stairlifts

This Otolift Air Stairlift installation in North Norfolk has ensured this lady has regained use of the upstairs of her house.

Norfolk Stairlifts give a two year guarantee on new stairlifts. This guarantee offers great peace of mind to the owner as it covers callouts, parts and labour everyday of the year up till 10pm.

Wood Norton only has about 200 inhabitants but none the less has made its mark in history. Benjamin Stllingfleet was born in the village and was an early attendee of The Blue Stockings Society which was an informal women’s social and educational movement in England in the mid–18th century. The society emphasized education and mutual co-operation.
The Society was founded in the early 1750s by Elizabeth Montagu, Elizabeth Vesey and others as a women’s literary discussion group, a revolutionary step away from traditional, non-intellectual, women’s activities. They invited various people (both women and men) to attend, including botanist, translator and publisher Benjamin Stillingfleet. One story tells that Stillingfleet was not rich enough to have the proper formal dress, which included black silk stockings, so he attended in everyday blue worsted stockings. The term came to refer to the informal quality of the gatherings and the emphasis on conversation over fashion.

Norfolk Stairlifts have installed many stairlifts in and around the North Norfolk area.

As the leading stairlift company in East Anglia, we’re confident we’ll be able to help.

Click here to arrange a free no obligation survey.