Norfolk Stairlifts have recently installed a Platinum Curve Stairlift in Heacham near Hunstanton .

The Platinum Curve Stairlift supplied by Norfolk Stairlifts is a low cost twin rail stairlift that is suitable for most curved staircases.

Mr Crisp was having real trouble with the stairs before our surveyor turned up to suggest a cost effective solution.  Mr Crisp was leaning heavily on the wall whilst climbing the stairs and had, unfortunately, already had a fall.  A stairlift was required promptly here!

Our surveyor is used to overcoming problems and providing a stairlift solution.  Luckily, Norfolk Stairlifts are not tied to one manufacturer (as some others are) and can quickly work out which machines suits the user best as well as the staircase.

Mr Crisp has both long legs and a narrow staircase!

After a thorough survey had been completed encompassing the staircase as well as measuring and assessing the user, a Platinum Curve Stairlift was decided on.

The layout of the property has allowed for the rail to finish in the living area away from the stairbase.  The Platinum Curve Stairlift as supplied by Norfolk Stairlifts has a twin rail design that allows it to wrap tightly around the staircase bannisters, this can be seen in the pictures.

This Platinum Curve Stairlift has a choice of three seat styles; Ergo Standard which is suitable for most people, Ergo Plus which has a seat shaped to best suit those of a shorter stature and Ergo Space which helps to get a safe fit on narrower stairs or for those with long legs or both!  This Platinum Curve Stairlift, from Norfolk Stairlifts, is fitted with an Ergo Space Seat in Beige that suits Mr Crisp well.

Mr Crisp did not use the stairs when his wife was out of the house, now he can.  Mr Crisp feared another fall.  This risk has now gone as all the hardwork is done by the stairlift.  Our Surveyor ensures that, whichever stairlift model is decided upon, that the user fits correctly on it.  All our stairlifts also come with proper seatbelts.

Mr Crisp tells us that everything went “exactly as expected”, things are “100% better now” and that he found the service from Norfolk Stairlifts to be “efficient from start to finish”.  We are proud that Mr & Mrs Crisp are happy to recommend us to others.

There are some before and after pictures here so you can see how easily a stairlift can fit, even on a narrow flight like this. 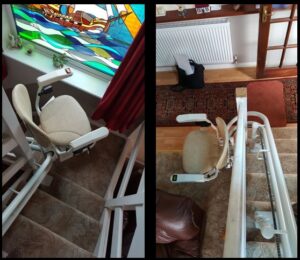 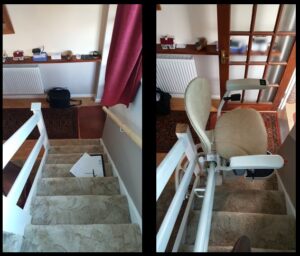 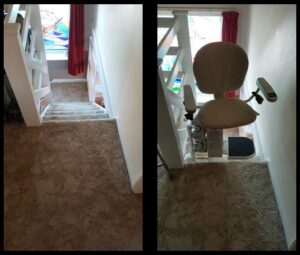 Norfolk Stairlifts give a two year guarantee on new stairlifts.  This guarantee offers great peace of mind to the owner as it covers callouts, parts and labour everyday of the year up till 10pm.  The Stairlift is also serviced after the first year at no extra expense to the purchaser.

Norfolk Stairlifts have installed many stairlifts in and around the Hunstanton area.

We offer new, reconditioned and rented stairlifts and install stairlifts for both private customers and for 7 District Councils including Breckland, Waveney, South Norfolk and West Norfolk & Kings Lynn.

At Norfolk Stairlifts, we understand how a stairlift can literally change people’s lives.  We know this because we have installed over 3,000 stairlifts throughout Norfolk and Suffolk and have seen the difference a stairlift can make.