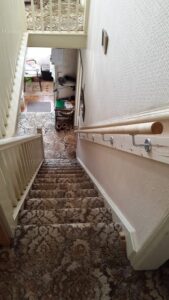 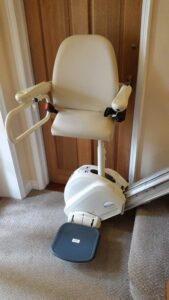 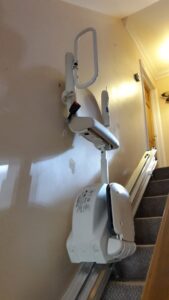 Squeezing on a very narrow set of stairs

The Meditek DSP 100 Stairlift supplied by Norfolk Stairlifts is used on narrow staircases where a traditional stairlift will not fit.  This staircase is very narrow at only 640mm or 25” wide.

The Lady who uses this DSP100 perching stairlift sits on the perch with her weight spread evenly and comfortably between the perch seat and the stairlift footplate.  The seat height is adjusted by the Norfolk Stairlifts engineer to ensure a good fit.  The DSP100 has a seat belt to ensure a safe journey.

This Meditek Stairlift from Norfolk Stairlifts  also comes with a powered hinge meaning that the stairlift rail does not become a hazard across the doorway at the foot of the stairs.

This Meditek stairlift installation in Attleborough, Norfolk stops at the top of the stairs allowing the lady to safely step off onto the landing.  You will see in the pictures that the armrest that faces down the stairs on the DSP100 stairlift has a safety barrier on it.  This provides reassurance and safe travel. In addition the stairlift cannot be used unless the barrier is down.

This Meditek Perch Stairlift from Norfolk Stairlifts can climb stairs upto 52 degrees (steep!).  It has a capacity of 15 stone/100kg making it suitable for most people.  It also is available in a selection of colours.

Attleborough is a charming market town just 15 minutes from Norfolk Stairlifts base in Hingham.  The town has an interesting history.  After the Danes swept across Norfolk and seized Thetford, it is believed that the Saxons rallied their forces at Attleborough and probably threw up some form of protection. Although the Saxons put up a vigorous resistance, they eventually capitulated to the Danes and during the time of Edward the Confessor, powerful Danish families like Toradre and Turkill rules local manors. If local records are correct, nothing but disaster was brought to Attleborough by the Danes, and it took the coming of William the Conqueror to restore some sense of well-being to the area.

Turkill relinquished his hold on the area to the Mortimer family towards the end of William’s reign, and they governed Attleborough for more than three centuries. In the 14th century the Mortimer family founded the Chapel of the Holy Cross (being the South Transept of Attleborough Church), about a century later, a Sir Robert de Mortimer founded the College of the Holy Cross, and later was added the Nave and Aisles, to accommodate the congregation.

Following Henry the VIII’s dissolution of the monasteries the building was virtually destroyed by Robert Radcliffe, Lord Fitz Walter, Earl of Sussex, and material from the building was used for making up the road between Attleborough and Buckenham. However, this left Attleborough Church with a tower at the East End.

Many towns can claim the distinction of having had a fire, and Attleborough is no exception, a great part of the town being destroyed by fire in 1559. It was during that period that the Griffin Hotel was built, and it was in the cellars of the Griffin that prisoners on their way to the March Assizes in Thetford were confined overnight, tethered by chains to rings in the wall.

Norfolk Stairlifts have installed many stairlifts in and around the Attleborough area.

Norfolk Stairlifts is an independent company that installs stairlifts throughout Norfolk and Suffolk. We offer new, reconditioned and rented stairlifts and install stairlifts for both private customers and for 7 District Councils including Breckland, Waveney, South Norfolk and West Norfolk & Kings Lynn.

At Norfolk Stairlifts, we understand how a stairlift can literally change people’s lives.  We know this because we have installed over 3,000 stairlifts throughout Norfolk and Suffolk and have seen the difference a stairlift can make.

To celebrate the launch of their brand new website, Norfolk Stairlifts are offering everyone £250 off the purchase of any new stairlift! Simply contact us, quoting offer code ‘WEB250’ to use your discount against a new stairlift. Offer expires at midnight on 12th September 2022. Terms and conditions apply. Read More