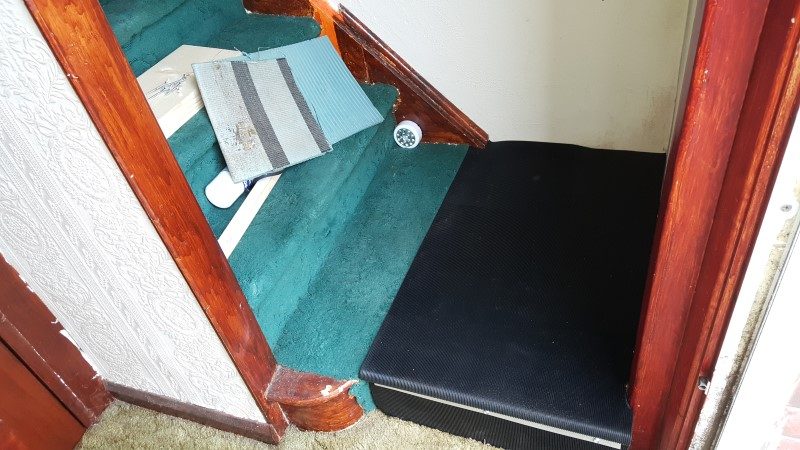 The original space between the first step and the outside wall of this house was only 500mm. This was not enough to safely park a stairlift. This is because there needs to be 100mm between the far side of the stairlift (away from the stairs) and the nearest obstruction. In this case the wall adjacent to it. This is part of EN 81-40 which Norfolk Stairlifts always strives to comply with.

A standard Brooks stairlift from Norfolk Stairlifts is 605mm at its widest point. This left us looking for a solution to get a straight stairlift fitted here. We had a plan in mind and in the first instance discussed the matter with the user’s Occupational Therapist.

Staircase adaptation to fit a Brooks Stairlift from Norfolk Stairlifts

Our idea was to make the space we needed by infilling across from the first step to the outside wall. However, this would require the user to climb up 1 step to the new “quarter landing” that we were intending to make. The Occupational Therapist and the user were content and able to do this. So, with this in mind and with the go ahead from all concerned we set about adapting the staircase.

As you can see from the pictures, Norfolk Stairlifts Engineer designed and installed the infill on site after initial measurements were taken by the surveyor.  Norfolk Stairlifts offer surveys as a free service across Norfolk & Suffolk as well as areas of Cambridgeshire and Essex.

We needed to create a space of over 700mm to allow the stairlift to park. The original 1st Step tread depth added to the original gap at the bottom of the stairs gave us the space we needed.

The new landing is covered, with firmly secured, rubber flooring. This ensures the user can have a safe grip on the flooring whilst turning to sit on the stairlift.

The Brooks straight stairlift installed here is fitted with a powered footrest. This enables the user to climb onto the new quarter landing and turn to sit without the footplate causing an obstruction. Once seated in the stairlift the footrest can be unfolded by using a button and feet placed safely on it.

The Brooks stairlift from Norfolk stairlifts was fitted and is operating safely and reliably to allow the user to rediscover the upstairs of their house.

Norfolk Stairlifts give a two year guarantee on new stairlifts. This guarantee offers great peace of mind to the owner as it covers callouts, parts and labour everyday of the year up till 10pm.

Norfolk Stairlifts have installed many stairlifts in and around the Wisbech area.

As the leading stairlift company in East Anglia, we’re confident we’ll be able to help.

We offer a free, no obligation stairlift survey.