Norfolk Stairlifts have recently installed a Brooks 130 Straight Stairlift on this open plan staircase in Caister on Sea in Norfolk.

There was quite a lot for our surveyor to take in here.

The double doors at the foot of the stairs meant that the rail could be a hazard here. 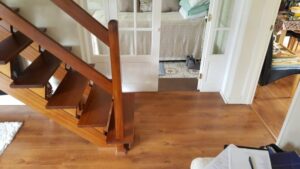 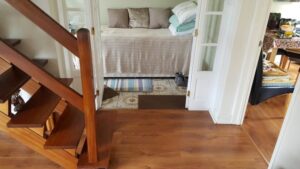 A power hinged rail was decided on as being the safest and most suitable solution.  When both doors here are opened they expose part of the staircase making the rail a potential hazard.  However, the householders only open both doors when required to.  For example, to move furniture etc. 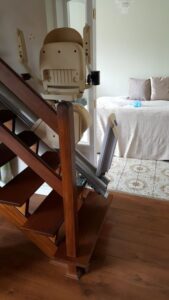 The stairs are narrow.  The Brooks 130 can be installed safely on narrower stairs than some other makes of stairlift.  The householders have opted to have a straight stairlift up to the quarter landing near the top of the stairs.  The stairlift users are able to climb the final step.  This is made safer as when the stairlift is swivelled at the top of the main flight it will effectively block the staircase at this point.

Our engineers were able to place the electronics and power supply behind the television set in the living room, so that they couldn’t be seen.  This is useful as open treaded staircases allow a lot more to be seen.

To ensure a safe fit on this narrow staircase the additional handrail that had been installed on the right hand side of the stairs was removed.  To help both stairlift users our engineers re used a portion of this handrail and installed it along the back of the quarter landing and onto the main landing.  This gives both users extra support when they climb the final step onto the main landing. 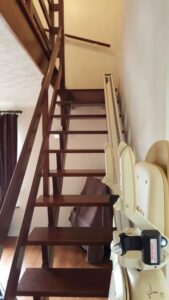 Caister’s history dates back to Roman times. In around AD 200 a fort was built here as a base for a unit of the Roman army and navy. However its role as a fort appears to have been reduced following the construction of the fort at Burgh Castle on the other side of the estuary in the later part of the 3rd century.

In the 1950s, a building near the south gate was excavated in advance of a housing development. These buildings certainly do not appear to be very military as they include a hypocaust and painted wall plaster as well as female jewellery, and it has been suggested that this building may have been an officer’s house, or possibly a ‘seamen’s hostel’ which may be a polite name for a brothel. The site appears to have been abandoned in the 5th century, but 150 Saxon burials have been found to the south of the enclosure.[5] The remains excavated in the 1950s are now managed by English Heritage and are open to the public.

Norfolk Stairlifts give a two year guarantee on new stairlifts.  This guarantee offers great peace of mind to the owner as it covers callouts, parts and labour everyday of the year up till 10pm.

Norfolk Stairlifts have installed many stairlifts in and around the Caister On Sea & Great Yarmouth area.

As the leading stairlift company in East Anglia, we’re confident we’ll be able to help.
We have showrooms located in Hingham NR9 4LF and in Beccles NR34 9TT.